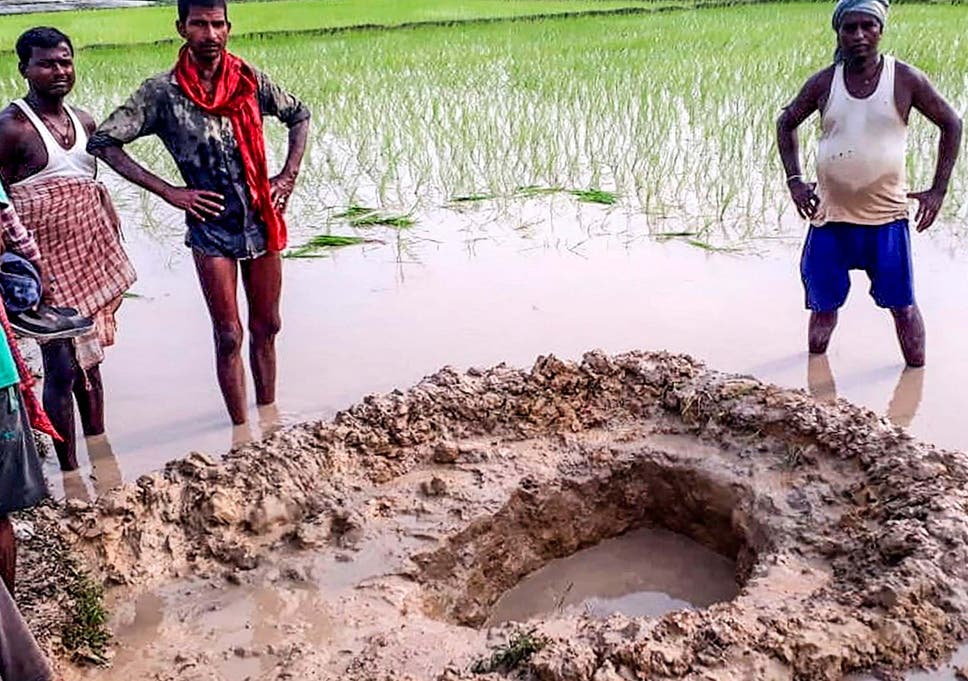 ‘Meteorite’ smashes into field in India

A suspected meteorite – glittering, magnetic and weighing more than 10kg – startled farmers when it crashed into a paddy field by an Indianvillage on Monday evening.

Some men were working in the field in Mahadeva village, Bihar state, when the object fell out of the sky.

“A group of farmers were working in the fields when they heard an unusually loud thud,” said Shirsat Kapil Ashok, a district magistrate, according to The Wire India.

“When they looked around to find the source of the sound, they spotted the object lying in a hole – about five feet deep – that was dug into the ground by the impact of the fall.”

Onlookers said the suspected meteor sent up smoke and caused people nearby to flee, according to the AFP news agency.

The villagers dug the object out and handed the the rock, which is magnetic, to local government officials.

“We have written to the state’s principal secretary, science and technology department, informing him about this peculiar object that looks like a piece of rock but its glitter is much more than that of an unpolished stone. Its magnetic pull makes it even more intriguing,” Mr Ashok said.

“However, we need to wait till the department sends experts who can study the object and arrive at a definitive conclusion.”

Meteoroids are objects in space which range in size from dust grains to small asteroids, according to Nasa.

When these so-called “space-rocks” survive the trip through the Earth’s atmosphere and arrive on the ground, they are known as meteorites.

Relatively small meteorites, where the rock measures only a few metres across at most, are thought to be relatively common.

The Earth’s terrestrial record of larger impacts is unclear, because craters are often obliterated by erosion, burial and plate tectonics.

‘Meteorite’ smashes into field in India | The Independent
https://www.independent.co.uk/news/science/india-meteorite-bihar-nasa-farmers-mahadeva-a9020716.html